Personal Injury Claims as a Result of Texting While Driving 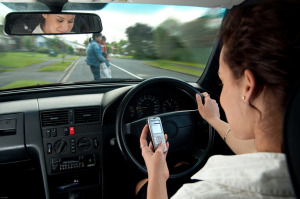 Text messaging for all drivers is banned in 45 states, as well as the District of Columbia. Additionally, Missouri, Oklahoma, and Texas have bans on texting for novice drivers. In 2013, in an effort to save lives, New Jersey also readily adopted a no texting law.

Of all fatalities on the roadway in 2010, 18 percent were the direct result of distracted driving, according to the National Highway Traffic Safety Administration. In 2011, the number of fatalities jumped to 3,000 along with over 400,000 injuries. Because the number of cases involving distracted drivers having or causing car accidents increased so dramatically, this new legislation was introduced in 2013.

This new legislation in New Jersey consists of a graduated penalty structure specifically for repeat offenders who violate the state’s hands-free phone law more than once in a 10-year period. Under this law, someone who commits a first offense is charged a fine between $200 and $400; if the law is violated a second time, the fine increases to between $400 and $600. If three or more violations occur, the fine goes up to between $600 and $800 and the person would be suspended from driving for 90 days.

Although the public has been provided with a tremendous amount of information pertaining to the dangers of texting while driving, people continue to do it.

With the increase in accidents related to distracted driving comes an increase in personal injury claims. Drivers have a legal duty of care to operate their vehicles in a manner that doesn’t put other drivers at risk.  When a driver takes their eyes off the road to engage in texting they have breached that duty and are considered negligent.  When that negligence results in an accident the driver is personally liable for resulting damages including property damage, out of pocket costs, medical bills and intangible losses including pain and suffering. This is true in all 50 states.

Personal injury claims as a result of text messaging while driving cover various levels and types of injuries. While some injuries are mild, most are catastrophic, including the following:

As part of the process, a personal injury attorney will confirm the other driver was at fault and that the accident was due to texting. This consists of working closely with accident reconstruction experts, talking to witnesses, obtaining police reports, gathering medical records, and dealing with an array of other experts who can prove liability.

Based on the findings, the personal injury lawyer will present a clear case in order to secure the most monetary compensation possible and ensure the at-fault driver pays for his or her actions.